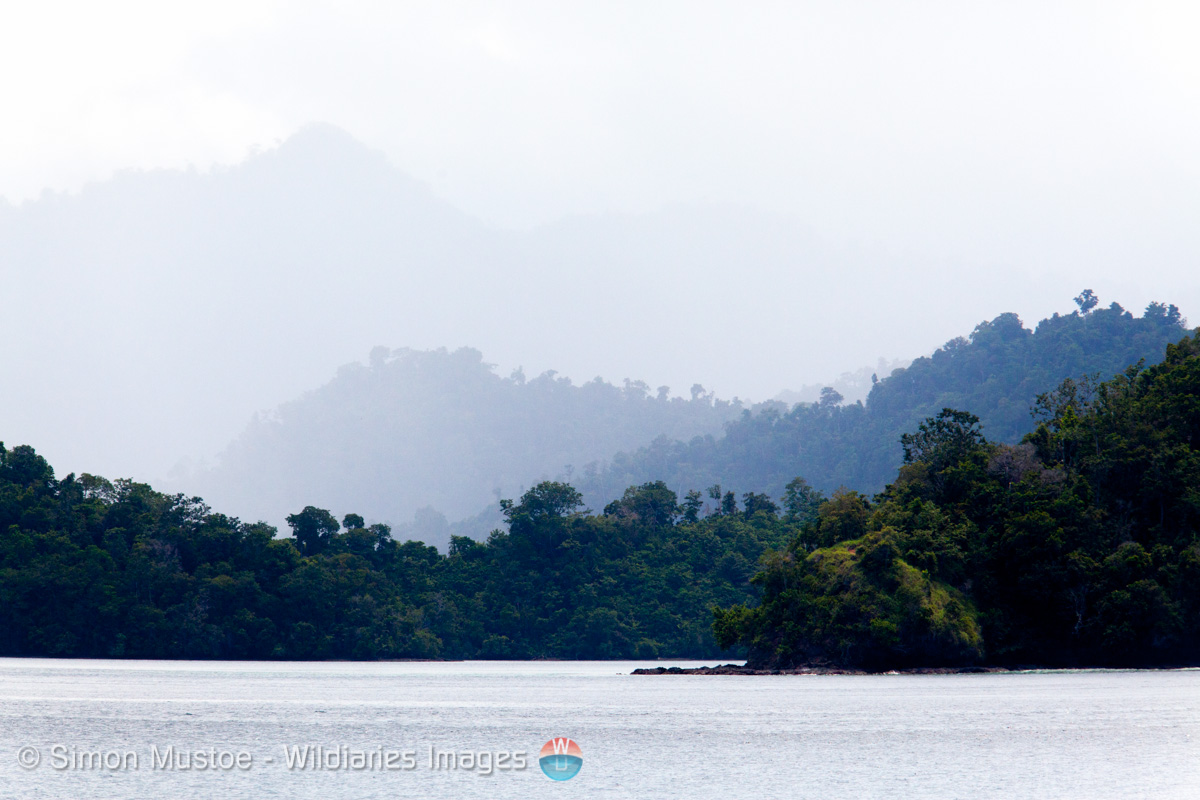 To visit Raja Ampat is to dive inside a gigantic living organism; to navigate through its nervous system, ride the rush of currents passing down networks of ancient channels, highways for cells and plankton that feed the organs of its being: reefs and ocean fronts where miniature forces combine on a massive scale, giving and supporting life.

In the 1996 Vernes-style cult classic The Fantastic Voyage adventurers were miniaturised and injected into the body of a scientist to save his life and thwart a cold-war conspiracy. Present-day visual effects may be criticised as “blobby globs and jellyfish molecules” [1] but also recall “the almost real time adventure” and a “wonderous exploration”. As a child watching this film, it was a window into life’s complexity, the fascination of exploring a new world. It’s how you feel when you dip into the other-worldly mysteries of Raja Ampat.

Raja Ampat isn’t merely the best place in the world to go snorkelling or diving, it’s a place to discover the origins of life. There are few places on Earth where so much exists in such a small place, where you can visualise ecosystems functioning completely.

Marvel at the myriad of busy, strange and wonderful living things - globs and jellyfish - that pass by in a relentless and enigmatically purposeful pursuit. Stand agog, gazing up at the busts of megaannum-old limestone mountains, lifted on the arms of continental plates. Shrouded in soft forest, these statuesque relicts of ancient corals cradle the ecosystems around them, above and below the ocean’s surface. 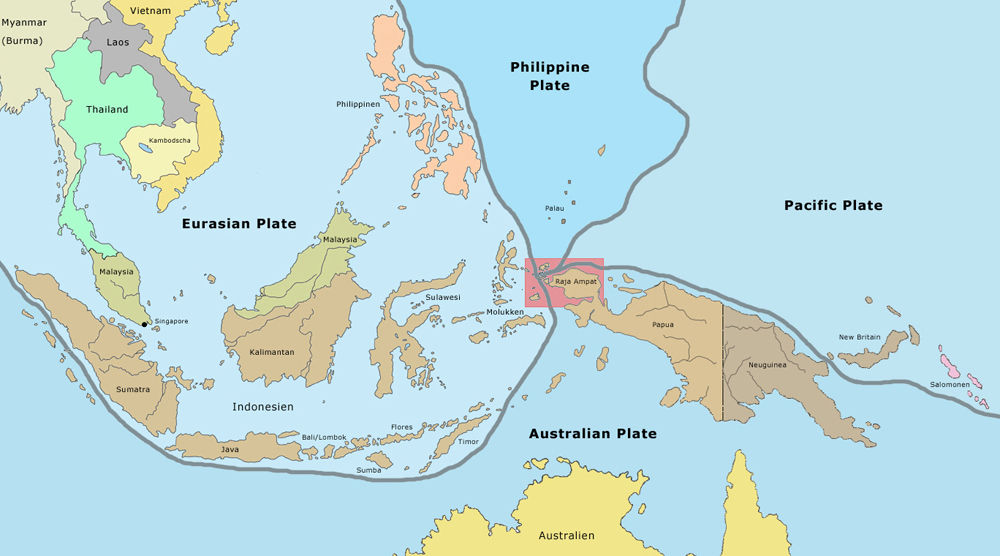 The forces that control destiny in nature can’t be wielded. Everything we are today and ever have been, is a result of land forms, wildlife and seasons. Our cultural history, folklore, religions and beliefs are a narrative built around survival. Existence is serendipitous. Raja Ampat has been trading heavily in the world’s oceans for so long, it’s impossible to separate humanity or our economy from what’s happening here.

Compared to Galapagos or Madagascar Raja Ampat is the silent-achiever, even though marine life in Raja is richer here than anywhere you’ll ever see. Watching business as usual makes you feel like a toddler thrown into the middle of the New York stock exchange.

To begin to understand how an area less than ten percent the size of Australia’s Great Barrier Reef ended up harbouring 75% of all the worlds fish and corals, we need to step way back in time.

A recent study by Arizona student Elizabeth Miller explains that, while it’s been a widely held belief that tropical coral reefs are intrinsically hotspots of biodiversity, it is in fact down to their stability. In fact, speciation in cold-water environments is higher but gets wiped out in successive ice ages. The “magic number” , she says, is about about 30 million years.

Located at the tip of West Papua’s birds head peninsula, Raja Ampat is at the touching point of not two, not even three but four continental plates. Implausibly, the tips of four of these, triangular in shape, point inwards and meet bang in the centre of the province.

During the Ordovician, about 500 million years ago, Earth was mostly ocean and the first complex life appeared. At this time, the birds head peninsular was on the outer edge of a super-continent.  Trilobites, now long-since extinct, are survived by Brittlestars which you can still see on Raja Ampat reefs today.

The continental plates, floating on beds of magma, gradually rotated and drifted. The position of land masses turned inside out, forming a circle around the vast Tethys Sea, with the birds head peninsula now on the inside. Eventually everything began to collide.

About 100 million years ago (long after birds and flowers evolved) the first subduction events affected Raja Ampat. One plate slipped underneath another, germinating volcanoes along the margins, spewing material into the oceans and bedding down the first coral polyps. Over four hundred million years these grew on top of each other, every scaffolding for the next generation. The immense pressures of rock and ocean fossilised them into limestone.

Raja Ampat was then connected to Australia and the islands of Western Indonesia were still distantly north of the equator. By the time a second subduction event occurred, which created the mountains and underwater canyons we know today, these land masses had been on track for a head-on-collision for about 30 million years. The Pacific plate slipped beneath the Philippines plate pushing kilometres-thick layers of limestone up above the ocean’s surface. Raja Ampat’s mountains were born. 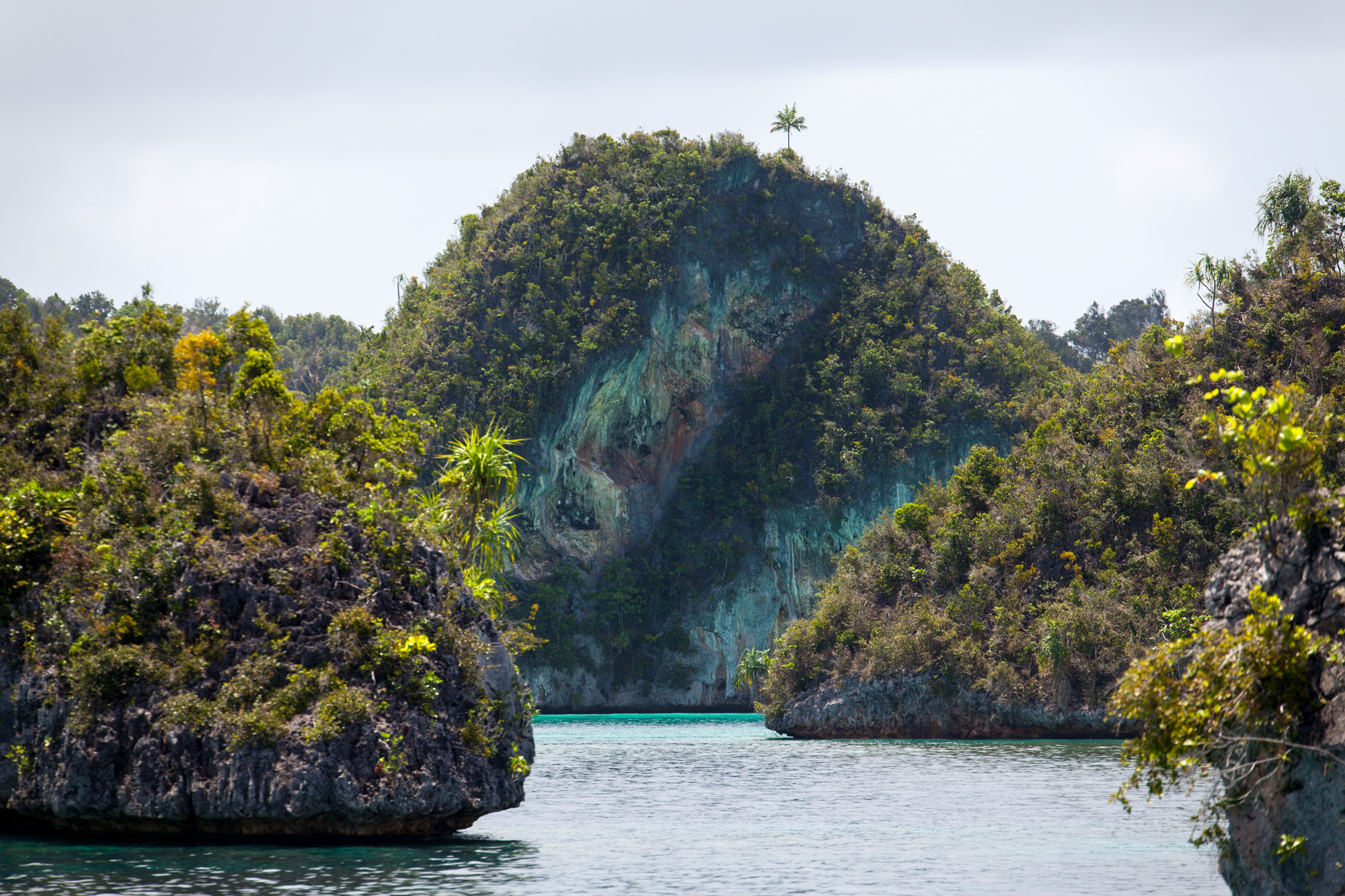  The familiar bee-hive-shaped mountains protrudences make up some of its 1,800 islands having been shaped and eroded by rainfall, rivers and waterfalls.

The highest mountains are about 1,200m, topped with razor-sharp jagged rocks forged not by fire but water - an acidic reaction with rain and limestone, gradually and imperceptibly eating away above and in the cracks between layers. Meanwhile, deep trenches between islands like Manokwari and Gam formed from the ancient paths of rivers. Blue holes are thought to be the splash zone for waterfalls that would once have cascaded from on high.

It’s humbling to think 100 million year-old coral reefs are still the building blocks of life today, providing the scaffolding for tropical forests, replete with endemic Birds of Paradise, as well as nouveau reefs at their margins. Even the islands are heralded as natural arks, hotspots of biodiversity preserving rare and fascinating wildlife.

But two more global phenomenon also meet here with spectacular results. The Indonesian Throughflow Current is a miracle of nature: part of the great ocean conveyer, a 1,000-year-long cycle of water that flows around the planet. The engine for this motion is the rotation of the Earth, combined with temperature changes in density of seawater saturated with salts. The basic properties of the cosmos: gravity and mass, being the cause.

After crossing the Pacific 15 million cubic metres of water a second has nowhere to go but collide with West Papua, whipping currents around the plethora of islands and meeting head-on, cooler and denser water emanating from Banda and Arafura Seas to the south. Here upwellings originate from intense monsoonal winds. From June to August these blow strong south-easterly when air is sucked north-west by rising temperatures over the Himalayas, drawing nutrients from 7,000m deep in the Banda Sea.

For thousands of years these cycles have been like clockwork, predictable. In the absence of humans, ecological systems emerged to exploit every resource and gap available at all scales, from the patchwork mosaic of forests and reefs, to the bacteria on single leaves. Like nowhere else in the world, Raja Ampat’s biodiversity - the processes that bind everything together - is phenomenal. The stability, resilience if you like, against long-term fluctuations and the moderation of chaotic weather and ocean systems rises from this. Wildlife acts like a valve, releasing energy and nutrients at just the right time and pace to support our life on Earth. It’s the acutely-balanced nature of all things. 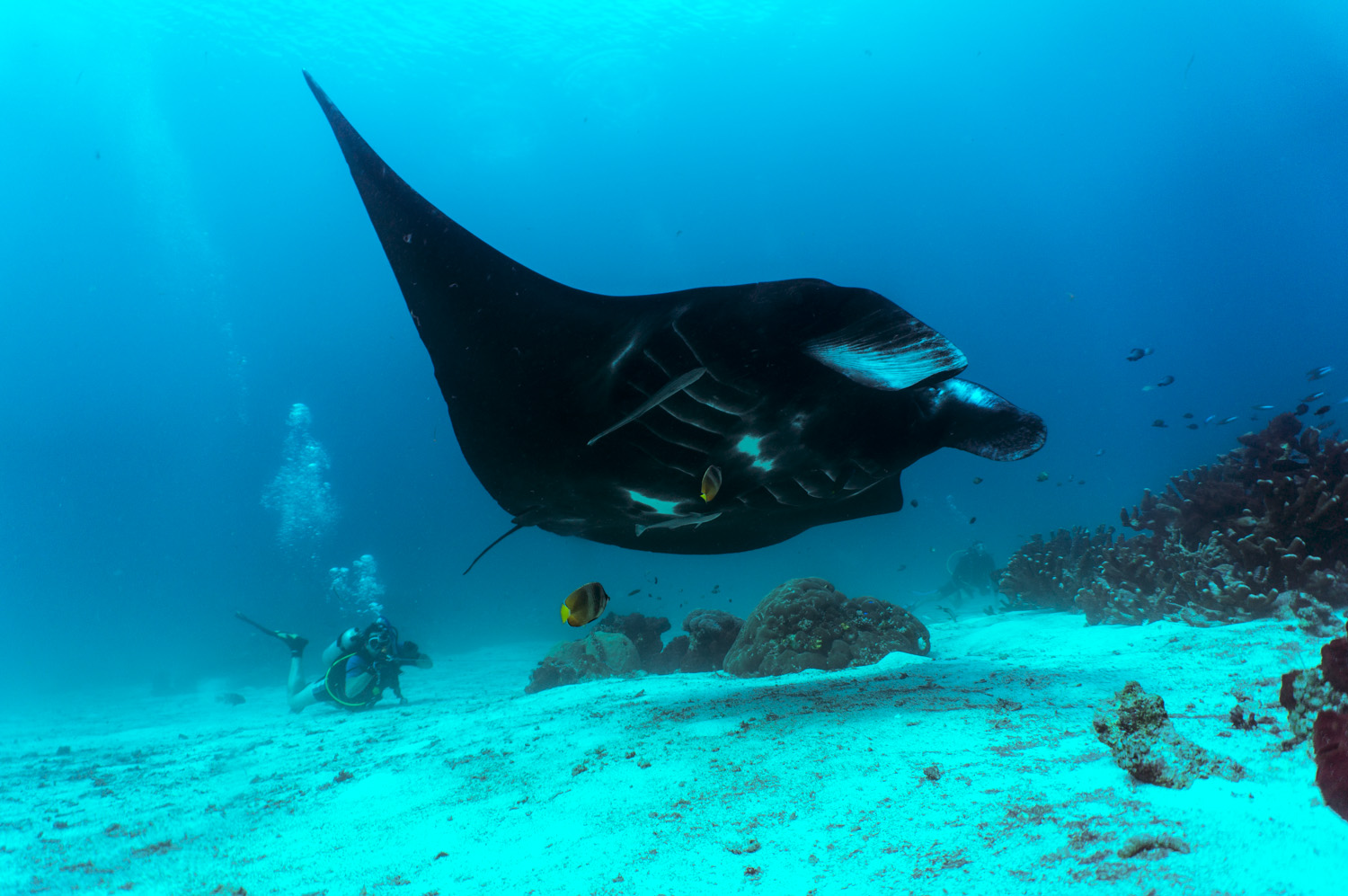 Beyond the glory of coral reefs there is a precipitous ocean, an offshore visual void, inhospitable, deep and often ignored. In Raja Ampat it’s harder to ignore how intrinsically these systems work together and play a major role in ocean processes. Passing between reefs and islands in close proximity are Oceanic Manta Rays, Sailfish, Tuna and as many as seventeen types of marine mammal: whales, dolphins and dugongs.

The density and diversity of marine mammals is extraordinary by any standards and with little imagination, you can conjure an image of vast herds of grazers and predators roaming the vast deep-sea plains teeming with baitfish and plankton. The role wildlife plays in ecosystem function is unquestionable on the African plains but has somehow escaped attention here. 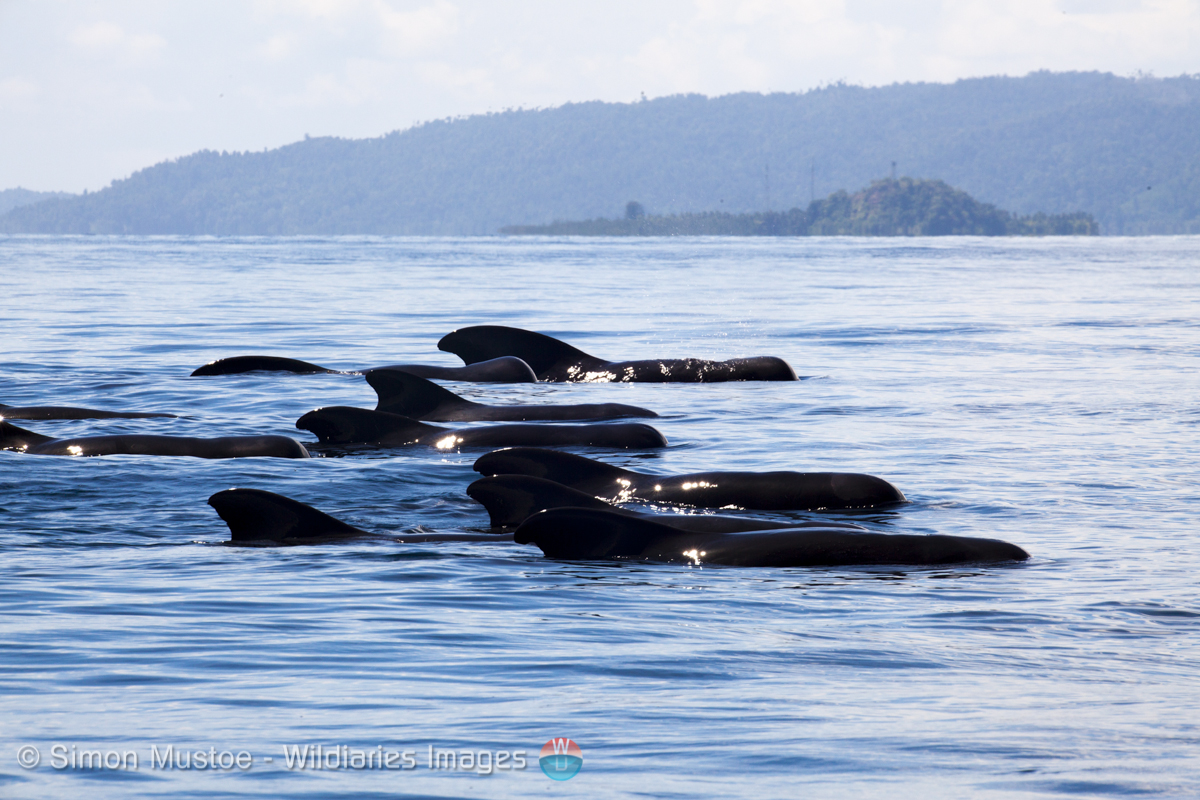  Nonetheless, some of the world’s richest tuna breeding grounds evolved (before they were critically overfished). Marine vertebrates are thought to be responsible for as much as a third of all ocean mixing. Reefs are as much dependent on them, to cycle carbon and nitrogen, as they are on the tides and moon.

So geological history and time aren’t the only factors in Raja Ampat’s unerring advance to become the world centre of coral diversity.

For at least 20 million years its complex topography has offered up conditions that maximise affordable spaces for creatures to trade with the environment - to make a living. The ebb and flow of currents, seasons, wind, tides, the annual migration of vast biomass of species and the balance, finely tuned between everything, means Raja’s ocean has been stable for millions of years, allowing a myriad of creatures to survive and feeding the surround oceans with resources to feed a growing human population.

It’s just happen chance this remains on a grander scale than almost anywhere else on Earth.

When you consider over 99 percent of all species, amounting to over five billion that ever lived, are estimated to have died out, humans may only have a 1% chance of survival. What has taken 30 million years to create ... and would take another 30 million to replace ... could be lost in a matter of a generation. This isn’t a loss we can afford for our species.

But there is hope still. For the same reasons Raja Ampat has been stable for so long, it’s escaped large-scale impacts from climate change that have affected other more famous systems such as the Great Barrier Reef. Scientists agree protection of this area is paramount ... that the coral triangle (in which Raja Ampat is the jewel) could encompass half of all the reefs most likely to survive and therefore those most worthy of protection.

If you weren’t aware of this (and many aren’t) you could be forgiven for overlooking its significance.

Look into the heart of what’s happening though and there’s the tangible sense of being an observer in a wild place that’s shaped our past, our present and will almost certainly, in the future, play a role in humanity’s outlook. We may one day come to reflect on our race’s own achievements measured as how well we protected Raja Ampat.

And what a fantastic journey it would be if we succeed. 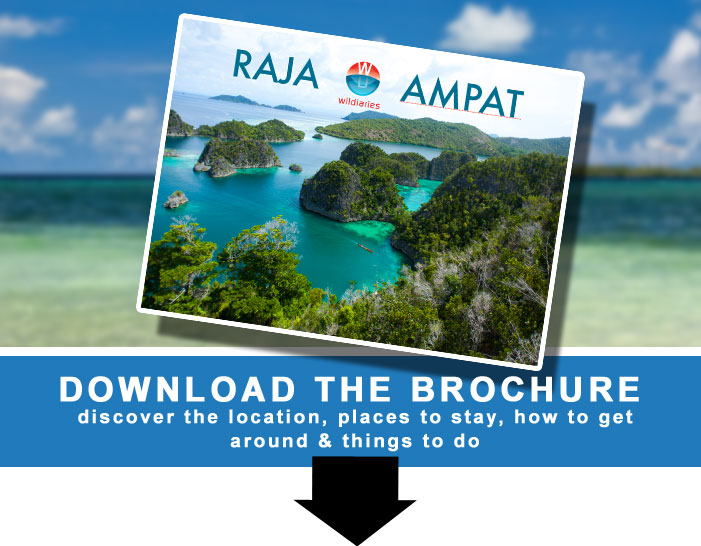 for assistance, finding the right combination of location and activities for you